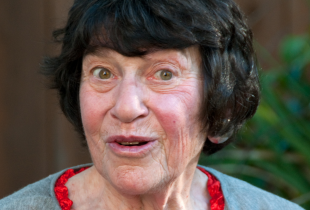 She made it to Las Vegas in America’s Got Talent, 2008, won People’s Choice in 2009 Branson Comedy Festival, the  finals in Bill Word’s Funniest Female Contest 2009 and semi-finals in the SF International Comedy Competition , the top 100 in Britain’s Got Talent not to mention winning both nights for the Texas Burlesque Festival without taking off anything that matters.

2014 TO&ST winner: best cabaret Edinburgh Fringe. And is at 80 is still going strong.